Pharmacogenomic testing can improve remission rates by individualising the selection and dose of antidepressants.

Major depressive disorder (MDD) is a common condition, with significant clinical, social and financial costs. The management of MDD encompasses a range of pharmacological, psychological and social interventions. Antidepressant prescribing is complicated by the diversity of drug choices (>20 in Australia), poor response rates to the initial drug selected and frequency of side effects. The resulting changes in medication are drawn out and can be complicated.1

Some of the variation in response rates and frequency of side effects can be attributed to variation in genes involved in the absorption, distribution, metabolism and excretion of specific drugs. Genetic analysis of these genes, that is, ‘pharmacogenomics‘ or PGx, has the potential to guide drug and dose selection, such that patient outcomes are improved. However, studies to confirm or refute the utility of PGx in the management of MDD have been challenging because of variation in genes and variants tested, diversity of clinical settings, different prescribing practices and the use of different outcome measures.

Meta-analysis of PGx-informed prescribing in MDD 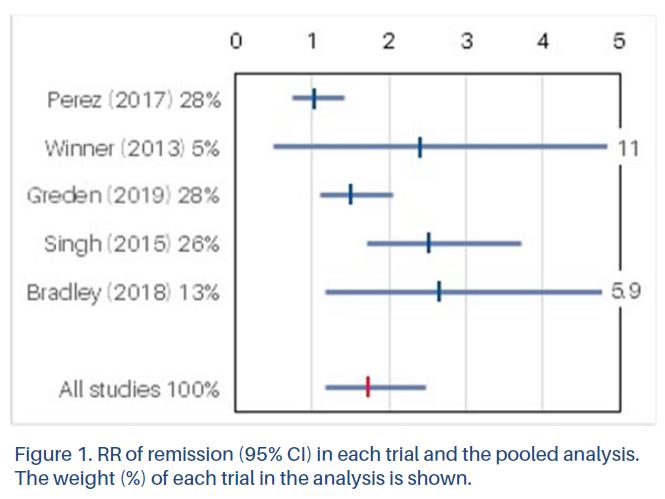 A recent meta-analysis reviewed the outcome of randomised controlled trials of PGx in the pharmacological management of MDD.2 The meta-analysis concluded that PGx-informed prescribing was associated with a significant improvement in the rate of remission of MDD.
The investigators identified five trials which examined the efficacy of PGx-informed prescribing in the management of MDD in adults. Remission (as determined by the HDRS-17 score in all trials) was selected as the primary outcome measure. There was heterogeneity across the five trials regarding the country, patient population, inclusion criteria, genes analysed, medications available, prescribing practices and study duration.
Each of the studies showed an increase in the relative risk (RR) of remission with PGx-informed prescribing versus treatment as usual (range 1.03-2.52) (Figure 1). For two of the studies, the increase in RR of remission was not significant.
It is striking that, despite the acknowledged heterogeneity in the patient populations, genes analysed, prescribing practices, study durations and effect sizes, the pooled relative risk of remission in the PGx-informed versus non-informed cohorts across these five trials was significantly increased, that is, 1.71 (95% CI: 1.17–2.48).

There was statistically significant heterogeneity 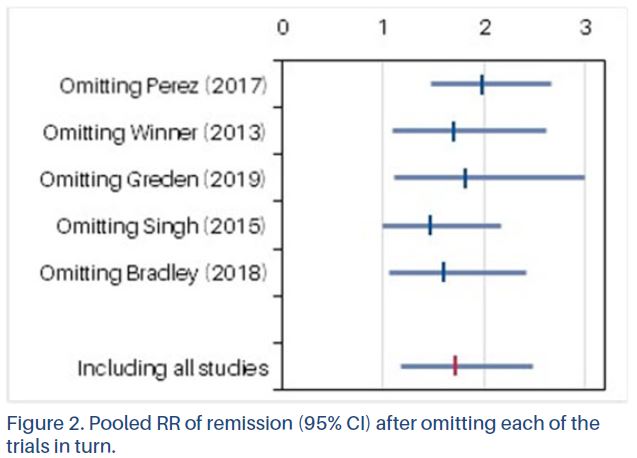 between the trials, as might be expected, given the diversity of settings and trial designs. The robustness of the pooled RR of remission was tested by removing each of the studies in turn from the pooled analysis (Figure 2). The pooled RRs of remission in each of these permutations was in the range 1.46–1.98 c/f the value of 1.71 when the five studies were combined. Only one permutation (omitting Singh 2015) yielded a non-significant RR of remission (95% CI 0.99–2.16).

The investigators commented that the clearest benefit may be confined to patients with moderate to severe depression who had failed to respond to (or who could not tolerate) at least one medication. However, this issue could not be directly assessed in their analysis.

Utility of PGx-informed prescribing for cohorts versus individuals

The pooled RR of remission in this meta-analysis identified the benefit of PGx-informed prescribing for a cohort of patients. However, this benefit was not distributed uniformly across the cohort; it was derived only from those patients with a PGx test result that lead to a change to their prescription. For example, if the doctor did not have to change the prescription on receipt of the patient’s PGx test result, that is, the prescription was congruent with that result, the test had little utility for that patient. In contrast, the principal beneficiaries of PGx-informed prescribing were those patients whose prescriptions needed to be modified in the light of their PGx test result.

The ’patient-specific’ benefit of PGx-informed prescribing could be described as the RR of remission in patients treated with congruent versus non-congruent medications. This measure of benefit for an individual will be higher than the benefit for the cohort as a whole because the individual benefits are distributed over the entire cohort, including patients for whom the test (in hindsight) did not have utility.

The degree to which the individual RR of remission exceeds the cohort’s RR depends on numerous parameters that are often not reported in publications, thus precluding a meta-analysis. However, one of the trials did provide this information. Greden, et al. reported a cohort RR of

This study by Greden, et al. illustrated the principle that PGx is more beneficial for a subset of patients taking non-congruent medications than for the cohort as a whole.3 This observation is in keeping with the comment noted above, that the clearest benefit of PGx-informed prescribing may be in patients who have failed to respond to (or who could not tolerate) an antidepressant, that is, those on non-congruent medications.2 The only study in the metaanalysis that was exclusively limited to patients with an inadequate or adverse response to a psychotropic medication was the study by Greden, et al.3 Despite this inclusion criterion, the cohort RR of remission in this study was similar to that of the other studies.

There is unequivocal evidence that metaboliser status is a key determinant of endoxifen concentration in serum, and that endoxifen concentration is inversely associated with risk of breast cancer relapse or death.1 These observations were reflected in the outcomes of a major clinical trial in which poor metabolisers exhibited increased risk of distant recurrence and all-cause mortality at nine years.3

Other clinical trials evaluating CYP2D6 metaboliser status and benefit from tamoxifen have yielded conflicting results.4 The marked heterogeneity across different trials can be attributed to variations in the dose and duration of tamoxifen therapy and in the performance of the genetic tests used. For example, some studies had analysed tumour tissue and were compromised by the frequent chromosome deletions and duplications which can occur in cancer cells. The prediction of a patient’s metaboliser status should only be done on analysis of normal tissue, for example, blood or buccal cells.

PGx-informed prescribing in patients with major depressive disorder increases the probability of remission.

The Sonic PGx Panel is available nationally through Sonic Genetics. The turnaround time is up to 7 business days, and results can be accessed electronically via Sonic Dx, by fax, or by phone.
For further information, pease contact us on 1800 010 447 or email info@sonicgenetics.com.au should you have any enquiries.